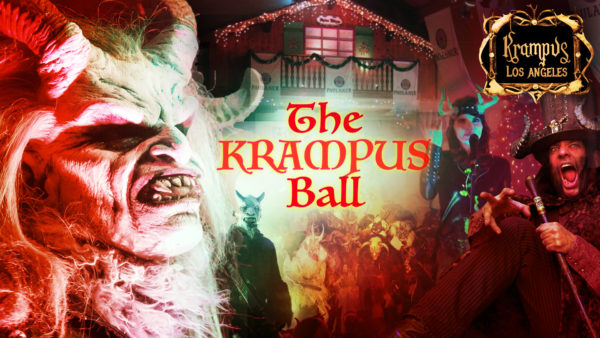 SAPPHIC MUSK The world’s only All-female Viking band — and the best!

THEMED COSTUMES ENCOURAGED (but not required)

The KRAMPUS BALL is back again at California’s favorite make-believe Germany, ALPINE VILLAGE, an über-quaint tourist spot catering to German ex-pats and styled like a Disneyfied Bavaria.  We’ll be in the grand ballroom.

Also raising a frightful din will be Southbay favorites and veterans of a bizarre scene only they could spawn, ROSEMARY’S BILLYGOAT (an older, more devilish incarnation of fast-food despoilers Mac Sabbath). Balancing cartoonish goofs with wickedly effective horror-metal, Rosemary’s Billygoat creates a fire-breathing psychotronic circus of a stage show with mammoth props, costumed stunts, and other devilry that would make the Krampus proud.

Descending from Valhalla by way of Lezstonia, SAPPHIC MUSK arrives at Alpine Village with some seriously Nordic Viking rock.  Expect a mighty punk-pop onslaught waged with lethal hooks, demented stagecraft, props, costumes and a rendition of their holiday classic, “Krampus Bitch.” Our Viking friends have just returned from their first European tour this fall supporting the release of their “Lady of the Twilight” featuring “Kittenz” and “Viking Luv”. All hail the Lady Freya and the blessed shield-maidens of Lezstonia, SAPPHIC MUSK!

As if this weren’t enough to sate your Krampus-lust, you can expect to be thoroughly menaced and switch-smacked by costumed members of KRAMPUS LOS ANGELES in their premiere seasonal outing. We won’t say when, but when you hear the gathering din of clanking cowbells you’ll know it’s close – the massed attack by over three-dozen devils and mountain spirits transforming the dance floor into a tumultuous maelstrom of horns and flailing switches. Pray that St. Nicholas can gain control of his malevolent slaves and save the evening.

The show will be emceed by Alpine Village own FESTMEISTER HANS, host of the Village’s own world-famous Oktoberfest.

And that’s only the entertainment on stage! There’s so much more that our guests bring year to year in an amazing array costumes portraying Krampus, the Krampus-adjacent, and other original takes on the theme. Arrive early to allow yourself exchange pleasantries and snap shots with our guests turned out in their diabolically festive yuletide best.

You might also take some time early on to avail yourself of a tasty one-ticket-buys all GERMAN SMORGASBORD from Alpine Village’s Steinhaus restaurant, and to peruse the artsy-craftiness of the KRAMPUS INSPIRED ARTISANS offering creepy/christmasy merchandise in our vending area. Vendors: Bat in Your Belfry, Contrary Dame, Damon Bard, Drakenstein Art, Miss Formaldehyde, Tee No Evil, Zombolina, and more.

THEMED COSTUMES ENCOURAGED (but not required)