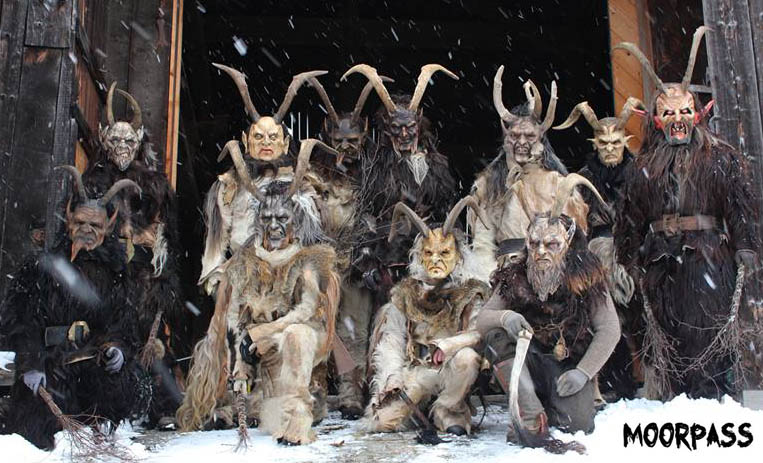 THE KRAMPUS: Lecture with Media and Costumes: Saturday, November 28, 2015: The lore of the Krampus illustrated with a festive stream of rare images, film clips, and walk-ons by costumed members of the Krampus LA Troupe at the Goethe-Institut Los Angeles in the midtown museum district.

THE KRAMPUS BALL: Saturday, December 5, 2014: Once again in its chalet-like home in Highland Park, the Krampus Ball, is the scariest costume party this side of the Alps. While we await the storming horde of devils and otherworldly beast of Krampus LA, we’ll be entertained by everyone’s favorite traditional Bavarian dance troupe, GTEV D’Oberlandler back with their alphorns, accordions, cowbells,and lederhosen, German cabaret from  Christina Linhardt and “Tuba” Heatherton, Polka with Linda Herman and the Raving Polka, the experimental, pagan neofolk of Tatzelwurm, and the diabolical dance of Miss Krampest Storm.

LA KRAMPUSLAUF, Thursday, December 10, 2015: This year the Krampus LA troupe will be joined by over a dozen members of the Moorpass Maishofen from Austria!  This first large scale outing by American and Austrian troupes together will cross paths with the Downtown Art-Walk, visit the Pershing Square Holiday Festival, an Austrian Cafe right in downtown LA, and take over a historic retail atrium.

KRAMMPSTEIN at ALPINE VILLAGE: Saturday, December 12, 2015: Rammstein meets Krampus as the horned hybrid Krammpstein performing this year in the über-deutsch ballroom of Alpine Village. Opening acts, and other costumed Christmas devilry TBA. The spectacle takes place in conjunction with Alpine Village’s European-style Christmas Faire, so in the bargain you get mulled wine, German beer, foods, sweets, and tons of snow carted in for the occasion.