(Original article on on Bizarre Central.)

Kids these days don’t know true fear. They are sheltered from anything remotely scary. Even modern mainstream horror films are watered down and unoriginal. They’ve become stupid monster/ghost comedies and shitty remakes starring people you wish would get their heads hacked off the first 30 seconds the movie begins.

Back in the good ole’ days, parents were all about scaring the shit out of their kids to keep them from acting like spoiled little cunts and it worked. The original Grimms’ fairy tales were horror stories for children which taught them the reality of death and to fucking behave through tales ofkids getting chopped up and eaten.

One of the greatest examples of the proper way to scare the shit out of kids is the legend of Krampus. Originating in Europe 1,500 years ago and still properly venerated in Austria and other Alpine countries, Krampus is a devil-like creature armed with a switch and/or sack who accompanies St. Nicholas early December. He punishes the bad children by either swatting them or taking them away in his sack while St. Nicholas rewards the good kids with gifts. This differs heavily from how the U.S. celebrates the holiday season because American kids receive presents no matter what and there aren’t any repercussions if they misbehave.

Throughout Austria and Germany, the annual Krampusnach has kept the Krampus tradition alive. People dress in epic demonic costumes reminiscent of something you’d see in a metal music video, stomping through towns, scaring and exciting children and adults alike.

Sometimes the festival can get a bit out of hand…

Recently, Krampus has grown in popularity outside of Europe, making its way to American cities like Portland and is now in Los Angeles thanks to creators Al Guerrero and Al Ridenour, who are also head deviants of the infamous Cacophony society. 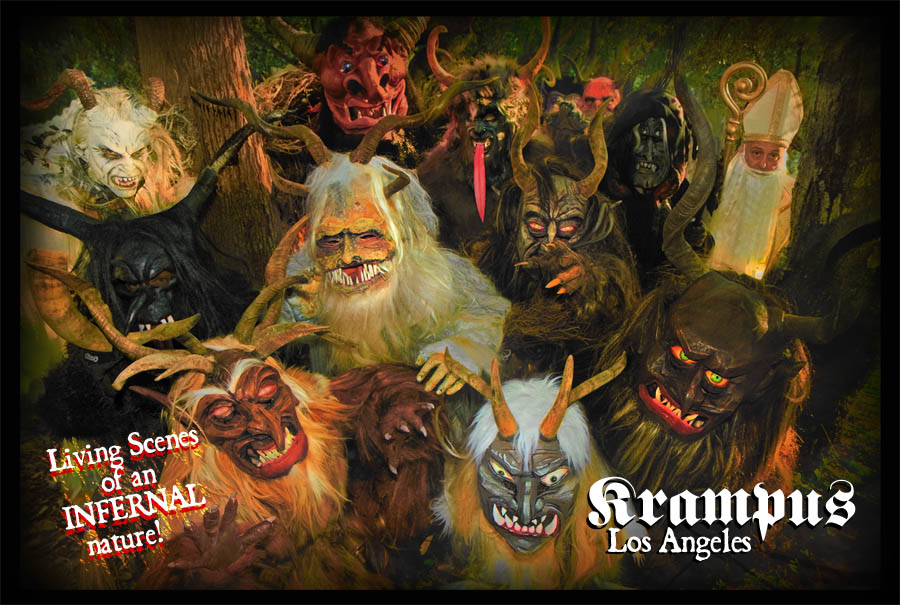 Where Krampus still prowls during the Yuletide season, children are still raised with a healthy fear of being punished for being shitheads. Bringing back this tradition which forces children, and adults, to earn good tidings, and fear the wrath for any wrong-doings, is what helped spark the first annual Krampus Los Angeles!

This festival not only does a remarkable job of bringing the tradition of Krampus to California, but adds its own Los Angeles twist through a Krampus ball, Krampus run, Krampus art show, and even Krampus-themed bands like THE KRAMPS, SANTA KLAUS NOMI, DJ KRAMPWERK, and KRAMMPSTEIN!

The Los Angeles Krampus festival is a month-long event headed by Al Guerrero and Al Ridenour, who have been working tirelessly to get the true spirit of Krampus going in their home city in hopes of making it an annual Hell-A tradition.

Al Ridenour went to Austria last year during the Krampus festival and had a chance to witness the traditions surrounding Krampus as well as learn some secrets about the making of a Krampus costume, which is a very involved process:

Each handmade traditional costume, consisting of up to 14 separate sheep or goat skins, takes three dress makers one day to produce, and costs between 500 – 600 euros. Some 15 hours are needed for a woodcarver to sculpt each demon mask which is made from stone pine wood with goat horns attached.

Al was kind enough to step away from the Krampus event-planning frenzy to answer some questions about the Krampus festival which is is still underway:

So I read that a Krampus got a bit unruly at the Krampus ball. What does one have to do in order to cross the Krampus line?

Oh, I think it’s Krampus’ who pushes the line under you. Our friend Mike from Rosemary’s Billygoat was performing as part of The Kramps, a Krampus-costumed Cramps cover band and took a stage dive that went a bit wrong. I believe it was a case of his being overridden by the spirit of Krampus. Once you get in those suits, something happens. Krampus takes over.  Ambulances are summoned.

I wasn’t aware of that. Or not very. Come to think of it, I also made a trip several years ago to see the Penitentes flog themselves on Good Friday in Taos Mexico, so last year’s outing to see Krampus would be my second whip-oriented cultural sightseeing trip. But of course these are very different things. Krampus whippings are really just devilish playfulness. Historically, the Church borrowed a pre-Christian practice where whippings were administered as a form of good luck (an ancient idea preserved in our idea of birthday spankings). The figure administering the whippings didn’t change much, but he was teamed with Saint Nicholas, and the meaning of the whippings changed into punishment for sins.

Is there an ideal female version of Krampus besides a female wood demon with tits?

I am trying to picture the “wood demon with tits,” and it is eluding me, but in a pleasant way. But the Krampus folklore is actually intimately tied in with a very important female figure, a sort of witch queen. In the Austrian Alpine regions where the Krampus originates, they called her Frau Perchta, and her entourage was called the Perchten, some of who were good and others bad. She came at year’s end to bring both blessings and punishments and was represented with two faces: one facing forward and beautiful, and the other crone-like and facing backward. The Church didn’t have room for this sort of ambivalence, and demoted the goddess to a witch, and her followers to devils. So these bad Perchten were the origin of the Krampus. As you might imagine, the Frau Perchta figure is becoming popular again as a figure of female empowerment as in this Salzburg exhibition by artist/photographer h. rogra.

What do people typically have to do in your mind in order to be punished by Krampus, kids and adults, as I suspect their sins might differ?

At least nowadays, kids are merely threatened by Krampus, intimidated with a crazy display of rattling chains and clanking cowbells and switch-swinging. That’d be when Krampus visits the house with St. Nicholas. But in the Krampuslauf, the public events where herds of Krampus run down the streets, it’s all about smacking adults, never kids, and honestly it’s mostly young men in costumes smacking young women. In the old days, only men could not dress as a Krampus, and only as long as they were unmarried. In a particular Austrian valley, they even called the switches or rod that the Perchten would swing a “life rod,” (“Lebensrute”) I mean you don’t need Dr. Freud, to tease out the fertility subtext here.

You made several costumes this year for the festivities and stuck as close to the traditional method as you possibly could, will you do anything different next year to make your costume more authentic?

Yeah, I am not particularly good at carving, but I tried to make my masks (which are really made of cardboard, fiberglass, and epoxy products) look like chiseled wood. I like the masks from the more traditional areas that are carved from pine. Much as I like the traditional stuff, we have to adapt to our climate and what’s on the market here. So heavy wooden masks and leather goat hides with fur will probably never play a big role in our events here. This was our first year, and all the work our crew put into suits is really amazing, and everyone contributed their own problem-solving know-how with a variety of approaches. It’ll be interesting to see how we can synthesize all this next year to perhaps achieve more of a family resemblance between troupe members as well as to the authentic European prototypes. 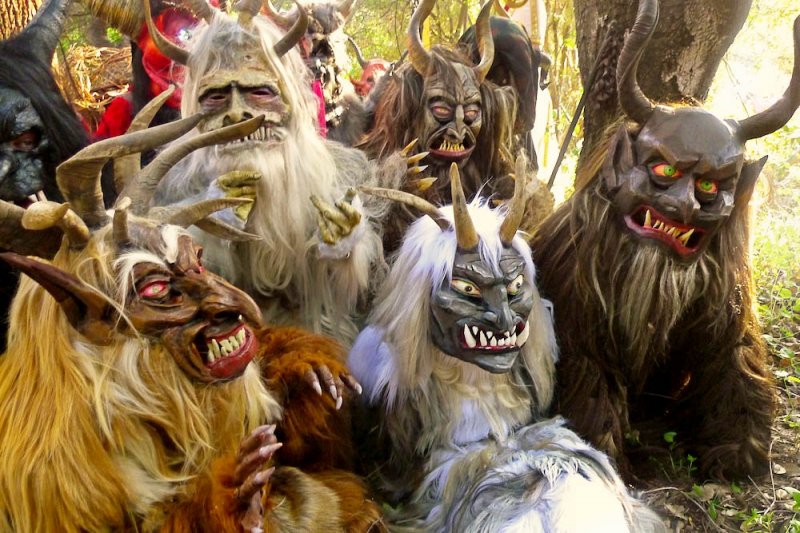 Krampus is mainstream now. I’m seeing it everywhere when it used to be a very niche thing, so what would you like the kids to take away from the meaning of Krampus?

Hmm… I will tell you my pet peeves that have resulted from this broadened exposure. The most common American misunderstandings would be pairing Krampus with Santa Claus when he’s really paired with Saint Nicholas, an entirely different figure associated with December 6, not the 25th. And referring to Krampus as “the anti-Santa,” when in fact, he is supposed to be the collaborative subordinate of St. Nicholas. 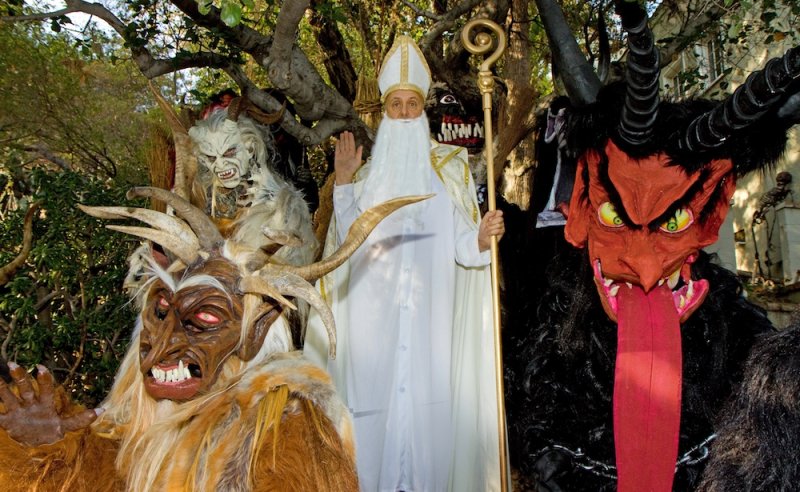 And I felt compelled to write a whole article for Atlas Obscura delving into the conflicting visual representations of the figure, and how the turn-of-the-century postcards standardized him almost like Coke standardizing Santa Claus. The book “Krampus, the Yule Lord,” seems to have muddled things too, leaving American graphic artists or would-be costumers thinking of the creature as a slim sexy satyr with rock-star hair, or that he has something to do with Loki and Nordic mythology, which is simply a storytelling contrivance and nothing to do with the folklore. There’s even a silly movie out that treats the Krampus as a sort of cryptozoological X-files case. I think eventually America will develop its own somewhat standardized Krampus, just like we have our coke-swilling Santa vs. the UK’s Father Christmas. And being American, this figure will be based what sells. So we’ll get a composite figure stewed up from comic books, the label on Krampus beer, or the salesperson for skateboards, and tennis shoes. But our group is going to keep some touchpoint with the older tradition. Our group has already hosted talks by European participants who are interested in coming back with their costumes, and I’ll be giving my own slide lectures, and working on a folklore book. We’ll see what comes out of it all. I’m sure it will be an interesting mix of naughty, nice, and naughtier.

If you are in Hell-A this month, you can see what Krampus events await via the official Krampus Los Angeles site. For those who can’t make it to the events, you can always check out the amazing pics and videos people are posting on the Facebook community.

Also Bizarro author, Troy Chambers, has made an incredible Krampus doll which is currently available to invade your naughty home…