(From the LA Weekly’s “LinA in LA” column.  Original article.)

Party Pick of the Week: A Krampus Rumpus 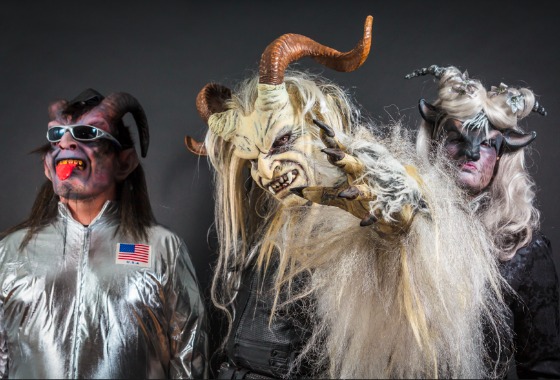 We’re officially dubbing 2013 the Year of the Krampus in Los Angeles. While the mythical beast rears his ugly head every December in Alpine countries, this year in L.A., he’s kicking Santa Claus to the curb. He’s at so many awesome celebrations that even ugly Christmas sweaters may need to take a back seat.

At this raging Rumpus, revelers are invited to dress up and celebrate the Winter Solstice (and the more pagan part of the season) with monstrous music: Krammpstein, a raunchy, ghoulishly garbed Rammstein tribute band, featuring members of Green Jello. Other mayhem-makers include the Soft Serve, aka “Leipzig’s biggest minimal synth band”; Free Range Orkestar’s cosmic Christmas jams; and the Krampus Choir, a holiday makeover of Rich Polysorbate’s infamous Clowns & Fetuses.

Other amusements include a beer garden, Krampus vendors and “Mistress Krampus’ Salon & Spankery,” for Krampus fiends and followers both naughty and nice.