A Christmas Devil Called the Krampus Is Taking Over L.A. 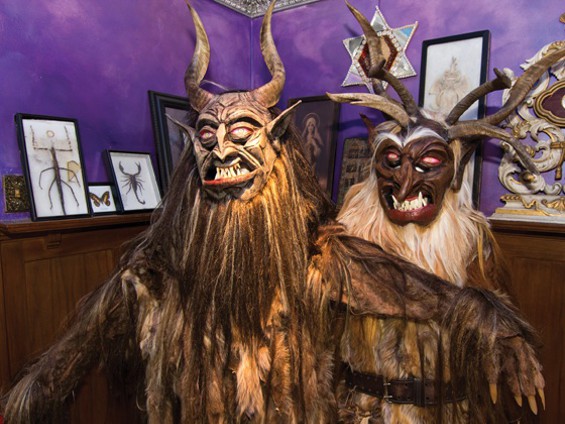 Costumes on display in Ridenour’s home. (Photo by Nanette Gonzales)

The Krampus is the beast demon of Christmas, who likes to frighten children and spank pretty young women. Basically, he is Santa Claus’ naughtier, hairier, lesser-known European cousin, who behaves inappropriately at parties. This year, artists Al Ridenour and Al Guerrero are bringing him to Los Angeles. They believe he will fit right in.

Hence, on a brisk November day a few weeks before the holiday season begins in earnest, the two Als are at Ridenour’s Glendale house putting the final touches on their giant, hairy Krampus costumes in preparation for the city’s first Krampus festival. Ridenour and Guerrero are producing a series of events in December: an art show at Bergamot Station, a Krampus run at Downtown Art Walk, a winter solstice concert, a beer garden and a costume ball.

The Krampus, whose origins can be traced to medieval Central Europe, is an Alpine version of the devil. He traditionally accompanied St. Nicholas on Dec. 6, St. Nicholas Day, and represented the punishing figure behind Christmas. Villages held parades where St. Nicholas would visit homes with the devil quick on his heels. Traditionally, the young men of the village dressed up in goat horns and pelts and roamed the streets, scaring kids with bells and chains and swatting girls with branches. Their costumes resembled whatever mountain or forest demon the farmers could come up with.

“Christmas used to be celebrated publicly in the streets, more like what we’re pushing for,” Ridenour says. “It got unruly. It wasn’t the domesticated family affair that it later became.”

Ridenour lived in Berlin for a while during college. He’d buy antique postcards of the devil figure at flea markets and tack them on his refrigerator. At the time he didn’t know much about Krampus, or even what this devil was. He was just drawn to it.

Now he knows rather too much. He knows that the lump of coal you get in your stocking if you’re bad is a residue of the Krampus tradition. He knows that Krampus was originally one of a set of monsters in Germanic folklore, which appears at turning points in the year — the solstice, say, or the year’s end. He knows that the whole thing started in rural areas but eventually became popular in the cities, where Krampus would manifest as a dapper devil in topcoat and tails. He’d be portrayed smoking cigarettes, sipping Champagne and otherwise mingling with the aristocracy.

“If we didn’t make it clear, they smack people,” he says. “Mainly young women and tourists. It’s like flirting.”

“They probably know which girl they want. They have their eye on her all year,” Guerrero adds.

“People had a great time smacking Margaret over there,” Ridenour says.

It was around this time that he and Guerrero started thinking about bringing Krampus to Los Angeles. Watching online videos of Krampus runs, Guerrero was blown away by the ritual craziness. “We can’t do the running of the bulls at the mall or anything,” he says, “but this is something that’s doable.”

Being crafty sorts of guys — both are graphic artists, and Guerrero is a former Disney Imagineer — the costumes quickly became their main focus. In rural Europe, Krampus costume fabrication falls to local artisans — wood carvers make the masks, and tanners, who ordinarily are in the business of women’s fur coats, make the suits. But Ridenour and Guerrero had to figure stuff out on their own.

Between them, they’ve made a half-dozen or so Krampus outfits. Five are lined up against the wall in Ridenour’s dining room. One is made of an old, shredded raccoon fur coat. No. 2 comes from a modified off-the-shelf Halloween werewolf suit supplemented with bits of a torn fox fur coat. Three is just a torso, featuring a wolf mask with an obscenely long, pink tongue. Four looks like a priest (Ridenour: “Actually, it’s Saint Nicholas”).

Five is the pièce de résistance. It is a massive, dark, furry monstrosity with huge horns — horns that once belonged to a real, live kudu. Ridenour fashioned the head out of cardboard and Bondo fiberglass putty. He carved the teeth from wood. For the creature’s long, ragged fur, he used human-hair braid extensions.

Both he and Guerrero ordered animal horns from eBay — goat and ibex in addition to the kudu.

“We had no template of how to make these,” Guerrero explains. “It’s not like there’s a Krampus-R-Us.”

“I’ve even stockpiled more coats for next year,” Ridenour says.

“I can’t stop,” he says sheepishly.

Still, Ridenour thinks, their costumes could be better. They could use more cowbell. In Krampus runs of yore, participants girded their fuzzy loins with leather belts festooned with bells — clanging, dairy cow–type things as big as baby skulls. He gets wistful picturing it. “You’d hear the bells in the distance. The anticipation is powerful.”

“Oh yeah,” Guerrero says. “You’d know they were coming. You’d hear the sound echoing off the mountains. The snow and the mountains don’t really translate to Los Angeles, and we’re aware of that. But we’ll try our best.”

“The bells are to drive out bad spirits,” Ridenour continues. “The switches are brooms to sweep out the old. Same with the crack of the whip. We still do it every New Year. That’s what fireworks are for.”

“It’s the whole dispelling of evil spirits,” Guerrero adds. “Where you cleanse and prepare yourself for the coming year.”

Ridenour nods and says, “In pagan times, the swatting was for good luck. Priests would spank villagers. We still do that, too. That’s the birthday spank.”

Ridenour plans to wear the costume with the tallest horns, partly because he can’t in good conscience ask friends to wear it. It is spine-crushingly uncomfortable. Currently, he is in the process of lining it with ice packs and installing a battery-operated cooling fan inside the head. He shrugs. “The adrenaline of wearing it makes it doable.”

They will don their costumes for as long as humanly possible. Ridenour estimates maybe 30 minutes.

“There’s something magical about putting on the Krampus costume,” Guerrero says. “You feel connected to nature. I can’t describe it. You assume a role. It overtakes you.”

Ridenour agrees. “Stuff happens. In Austria, laws are kind of broken each year.”

Here in litigious America, they are going to play it carefully so as not to burn bridges. Kids are strictly off-limits, and young ladies are to be frightened only with their consent. They want Los Angeles Krampus to be an annual event, after all.

Filmmaker Werner Herzog sent his regrets. He got word to Ridenour and Guerrero that he was terrified by Krampus as a child and wished he could attend the festivities, but unfortunately he’s been detained by his own artistic endeavors in the Sahara Desert.

But director Tim Burton is contributing Krampus artwork. For the winter solstice concert, an industrial hard-rock band is writing music that will “lyrically reflect the inner world of the Krampus.” For the ball, a Bavarian dance troupe will be heel-slapping their lederhosen. And a few dominatrixes have kindly offered their spanking services.

With expectations high, Ridenour says he’ll probably keep tweaking his costume until the last minute. Asked if he gets the magic feeling Guerrero described when transforming into Krampus, he chuckles

“Along with the heat stroke? Yes,” he says, adding, “we are kind of old for this.”

“We have to be conscious of doorways,” Guerrero continues, smoothing a clump of fur on one of the monsters. He hopes people will make their own costumes, too. “If I can give only one important tip,” he adds, gesturing to the Krampus’ crotch area, “put in a fly.”