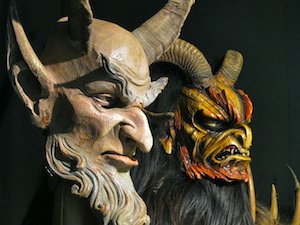 Krampus, the dark companion to St. Nicholas once known only in German-speaking Europe, is quickly going global. Increasingly turning up in American books, comics, television shows, and films, the creature also now parades down American streets as part of costumed “Krampus runs.”

As LA emerges as a leading hotbed of Krampusmania, Krampus Los Angeles will be bringing it all back home with tonight’s presentation on Krampus folklore at the Goethe-Institut, Germany’s cultural embassy with offices locally and throughout the world.  Assisted by costumed walk-ons by friends, Krampus LA Co-director, Al Ridenour will illustrate the talk with a festive stream of rare images and the occasional l film clip. Special emphasis will be placed on the Krampus’ lesser known cousins, diverse historic and regional folkoric figures often in danger of being swept away in the global swell of Krampusmania.

Topics in this whirlwind tour will include the magic and mummery of the “Twelve Days,” straw bears, murderous saints, ghost horses, phantom goats, and other figures that haunt the winter folklore of German-speaking lands.

Modeled upon European source images, costumes used in this presentation were individually crafted by members of Krampus LA.  Most are being shown for the first time.