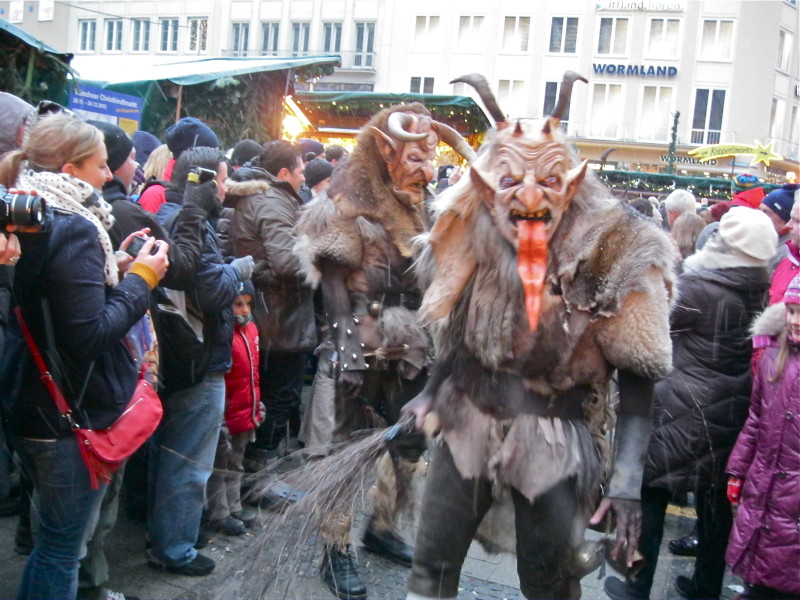 The Krampus (also Kramperl or Klaubauf) is a figure of European folklore associated with St. Nicholas and his visits to children on St. Nicholas Day (December 6).  On this day, or the preceding evening, the saint makes his appearance (in traditional bishop’s robes and mitre) to distribute small gifts to children who have behaved.  Children who have misbehaved are menaced by Krampus, the shaggy devil-like beast at his side.  The creature brandishes switches, rattles chains, and carries on his back a large basket in which particularly recalcitrant children are said to be carried off for further punishment.

The Krampus-Nicholas tradition took shape in the 17th century, but the saint’s henchman is largely believed to have pre-Christian roots in a malevolent class of mountain spirits known in Austria and Germany as Perchten.

In regions where he is known, exchanging Krampus cards ( Krampuskarten) featuring playfully menacing renderings of the beast has been a part of pre-Christmas festivities since the late 1800s. 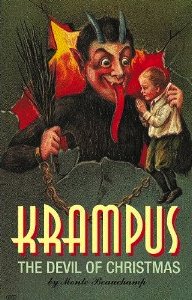 Krampus also makes live appearances as part of a roving costumed troupe.  Originally these troupes consisted of a Saint Nicholas, accompanied by an angel, a basket-carrier (for the  gifts) and a Krampus or two, but over the last several decades, Krampus has become more prominent, leading to the development of the Krampuslauf (“Krampus run”) in which dozens or perhaps hundreds of participants costumed as Krampus proceed through city streets. Saint NIcholas or the other traditional figures may be barely represented or entirely absent.  Sometimes witches from the Perchten mythology are also included.

Stateside interest in Krampus has been growing over the last couple decades, thanks in large part to the publication of books like Krampus, The Devil of Christmas and others by enthusiastic Krampus card collector, and alternative art tastemaker Monte Beauchamp.   Every year these images circulate more widely on the net, and annual Krampus celebrations have already sprung up in Philadelphia and Portland.